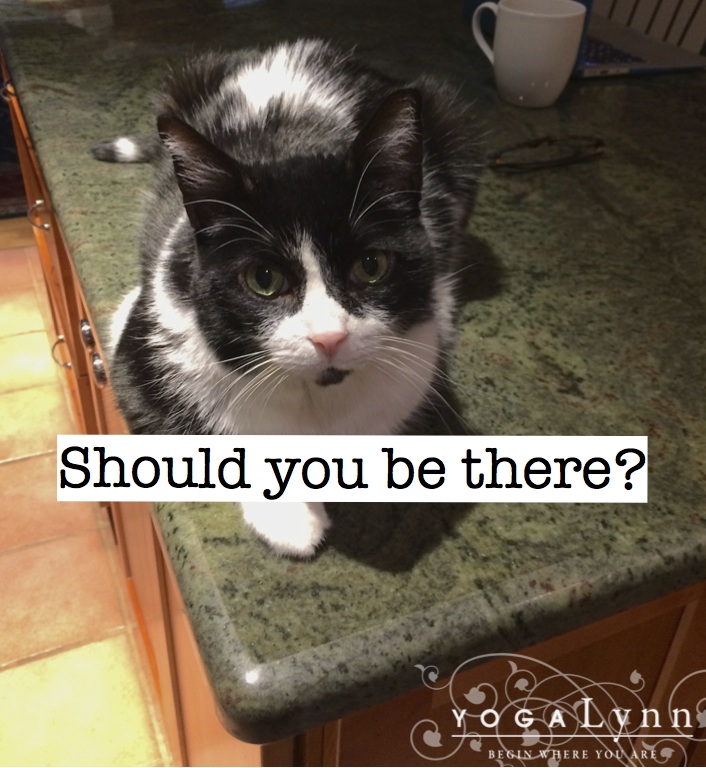 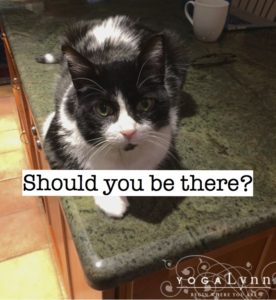 I count my two cats among my greatest yoga teachers. (That’s Spot in the picture.) Physical postures? The Internet abounds with images of cats effortlessly shape-shifting into interesting spaces. Quiet contemplation? I’ve learned not to be shocked upon opening a cupboard or closet to find a pair of eyes peering out from behind a can of tomatoes or between the folded sheets.

For examples of single-minded focus on what’s important, it would be hard to beat an attention-seeking feline brazenly walking across your keyboard as you try to type. Or perched atop the nearest dresser, mindfully knocking things off until your attempt to sleep late gives way to their need for breakfast.

My cats’ predilection for freely inhabiting our shared space is admirable, but it does sometimes cross the boundaries of safety, hygiene, or protection of fragile objects. I’ve devised a pretty effective deterrent for those occasions in which I find them roaming the kitchen counters, nestled in the fresh-from-the-dryer laundry, or perched precariously on the printer waiting to attack any paper that attempts to emerge.

Fixing my gaze directly at the offending party, I ask in a firm, resolute voice:

Usually that’s all it takes to get a course correction, even if it’s made to appear as if moving was entirely their idea. I hadn’t thought much more about that question until recently, when I had occasion to revisit it in a surprising way. In the midst of doing paperwork, a chore I detest, I logged into my computer for a quick minute to pay a bill.

Suddenly an hour had passed and I’d accomplished nothing. My monitor revealed a stack of open pages including a vegan recipe, some anatomy drawings, Facebook pictures of somebody’s lunch, a political meme, some email, a flash mob video, and several other equally random items. My chaotic monkey-mind had summoned enough diversions to distract me completely.

As I sat there pondering the wasted time, a voice popped into my head. My voice actually. Asking in a mildly disapproving tone:

Traditional religious, civic and social institutions all have their rules of conduct. But I daresay the Ten Commandments, Four Agreements, Rule of Law, even Robert’s Rules of Order offer few instances of wrongheaded or unskilled behavior that wouldn’t be covered by asking that question. Hearing it in my own head instantly drew attention to my stalling tactic and brought me back to the task I had been avoiding.

Think of all the places we find ourselves that we really don’t belong: Looking into the refrigerator at midnight; gossiping with a coworker; watching people behave badly on reality television; ruminating over a situation you cannot change; perusing sports scores (or pictures of cats in sinks) when you’ve got work to do. The list goes on and on.

I’ve taken to posing that powerful question whenever I catch myself veering off course. It serves as an amazingly accurate moral and organizational compass. Sometimes a splash of cold water in the face of aversion, weakness, or forgetting what’s important is all it takes.

What about you? Do you ever find yourself immersed in a conversation, action or thought that doesn’t really serve your highest purpose?  (That includes letting that voice in your head give you a hard time for being human, by the way.) What would happen if you asked  that question of yourself.

Give it a try. I’d love to hear about your experience in the comments below!

I think you have come up with an excellent idea and I intend to give it a try(provided I can remember it when the situation arises.)

Wonderful blog Lynn. Thanks a lot. I’m going to use it….and pass it on.

I love this. This will be my new mantra! Hopefully in asking the question “should you be here?” I will stay on course and avoid my usual mantra of “I am lost”. Wish me luck! I am on day two of my new life.

This could become my new Mantra!!