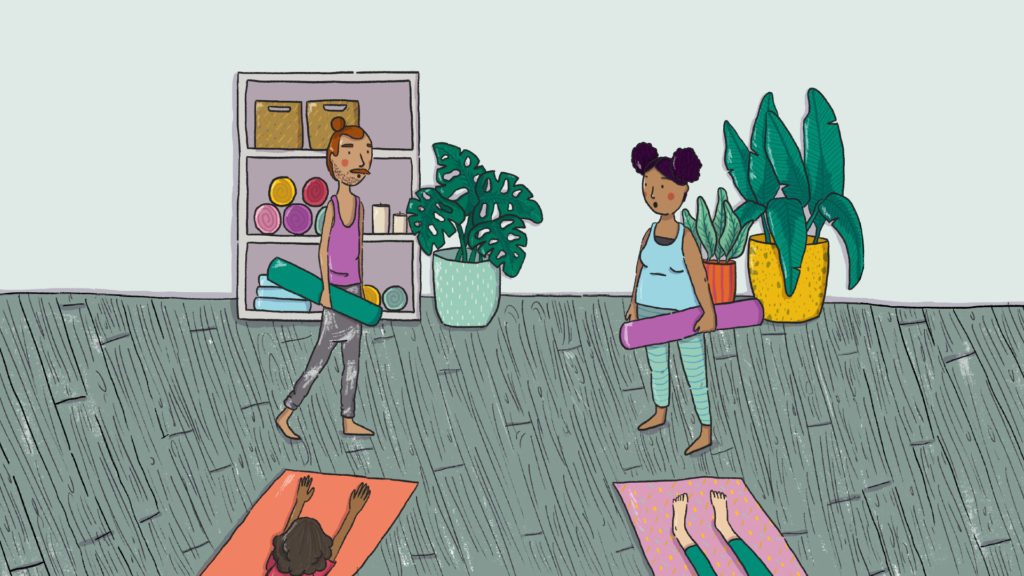 Last week a new student came into class and began arranging her mat and props on the floor in a somewhat tentative manner. This class is ongoing and most of the attendees are regulars. Although the atmosphere in all of my classes is low key and friendly, it can intimidate anyone to be a newcomer in a group of people who obviously know and like each other.

As each person entered, the newbie, concerned about disrupting the normal order, asked whether she had taken their spot. “Ah yes,” I thought. “The spot.” Attend enough yoga classes and sooner or later you are bound to hear, “Excuse me, but you’re in my spot.” This directive will be either aimed at you or someone else, often delivered in an authoritative voice that implies some kind of “alpha yogi” status. It’s as if regular class attendance affords one the automatic right to a specific bit of real estate on the studio floor.

One of the eight-limbs of yoga is a set of five moral guidelines called the Yamas.  These principles comprise an ethical compass to help us navigate our way in the interconnected world. The fifth of these, Aparigraha, speaks to the principle of non-attachment or non-possessiveness. It cautions us not to cling to things that are not useful, necessary, or important. In other words, it’s cueing us not to stress the small stuff, such as where to stand during a one-hour class.

I was most gratified that day to hear person after person reassuringly welcome the newcomer and invite her to stay put. But I could not resist the urge to weigh in.

I did not want this moment to pass unnoticed.

I addressed the class by saying that I’d heard the question being posed and was pleased by the responses. I also wanted to offer a global answer because of the perfect opportunity it offered for a quick hit of svadhyaya – a sanskrit term drawn from another limb of yoga called the Niyamas, which are practices we can use to cultivate our inner integrity and wisdom. Svadhyaya is a process of self-study or self-observation.

I told them about the principal of non-attachment and how we imperfect humans can drive ourselves to distraction worrying about things that don’t actually matter.  Observing ourselves in these moments can give great insight into what’s truly important.

“If you are coming into yoga class with the need to stand in a certain spot,” I said, “you’re not getting the yoga.” A few immediate glimmers of recognition were followed by a bit of chuckling. “If we become attached to something as inconsequential as where to stand in yoga class,” I continued, “think of all the equally unimportant things large and small that we form attachments to over the course of a 24-hour day. To catch ourselves in those moments and begin to let go of the things that don’t serve us–That’s the real practice of yoga.”

There was a moment of silence as my words landed, and then two people promptly picked up their mats and switched places on the floor. We all laughed, high-fived the brave two, and began our practice, happy to celebrate the idiosyncrasies and foibles that tie us together and make us human.

What about you? Can you think of an example where you’ve witnessed yourself or another holding on for dear life to something of no consequence whatsoever? Please share your insight in the comments. We can all learn from each other!

Yeah that “spot” thing is bizarre. Dance classes are the
Same way. Its all about moving your body in space. And if your space is confined to one area….considering the size of the universe, you are in trouble

Confining yourself to a small space within an entire universe–great way to put it, Roberto!

Ah Yes…In a different setting, but similar concept is the ‘place holding’. A quilt guild, where 200 women could exchange ideas, techniques etc… but to learn from a different person, would mean sitting at ‘their table’ ! One Person holds the table until her friends come, thus we only get to know or learn from the same people we are ‘allowed’ to sit with. A challenge to the mission of that type of group. Their SPOT is a group, and we may not touch it thus minimizing the opportunities to gather & exchange new knowledge.

It’s interesting how something seemingly inconsequential can carry so much emotional weight. Part of the challenge for me, is to weigh up the importance of the issue, and then even if it is important, to be able to let it go.