In almost all things yogic, I often defer to one of my greatest teachers: my cats. If you follow me on Facebook, you’ll have seen one of the many entries entitled “The Yoga of Cats.”

Over the years, I’ve learned about being in the moment and taking care of myself in ways large and small from observing all animals but especially cats. They freely give themselves what they need, without over thinking what they deserve or what others expect of them.

Mostly I take inspiration from my two cats, Spot and Puff. We humans are obsessed with “deserving” our rest and making sure that those who see us resting know we deserve it. But these two won’t hesitate to find comfort regardless of where fate or questionable judgment lands them. More than once I’ve looked into a cupboard or closet–even a drawer once–to find a pair of sleepy eyes contentedly gazing back.

They seem to innately understand that acceptance of a situation, i.e., realizing that sometimes the only thing I can control about a situation is my reaction to it, is not the same thing as being okay with what’s happened. Stuck in a dark place without an obvious or immediate way out, wouldn’t it just make sense to take temporary refuge in a cozy sweater and calmly pause until a different option appears?

Case in point: It was a hot and humid Saturday in late July a few years ago. If you are familiar New York City, you will appreciate the affect of being in the sixth day of oppressive heat on streets full of traffic, vendors and wilting crowds. Not a very inviting prospect to be sure, but it was Saturday and my inner critic had a list of important errands that must be done so as not to waste the day.

I stepped outside. The sensory assault was immediate and overwhelming, like walking into an oven. I ticked off the first errand on my list at the teashop on the corner. Check. Back outside my joints began to ache. Through the haze, I headed for the bank to deposit some checks. Check. I felt a headache coming on. As I crossed the street toward the hardware store, the jack-hammering of a crew in the middle of the street woke me up to the fact that none of these errands was either critical or worth the miserable experience. I headed home.

Walking into my living room, I immediately spied my cats. 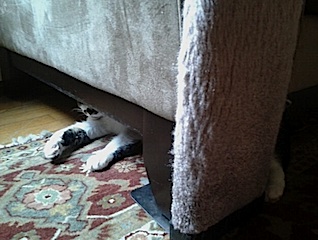 There was Puff taking refuge from the sun under the couch, one paw sticking out atilt like a furry barometer. Spot was sprawled out in the darkest corner of the room, the full length his black and white body spread across a cool wall, apparently his version of a self-venting mechanism.

Both eyed me with a mixture of curiosity and bemusement that seemed to say, “Seriously, did you not consider what would happen if you went out there? You’re supposed to be the smart one!”

While I was out conducting business as usual, oblivious to my surroundings, there they sat, adapting to the day that was right in front of them, making themselves as cool and comfortable as possible. Lesson learned. I cranked on the air, got out a book and joined Puff–on top of the couch.

What about you? Do you have a source that inspires you to be present for each unique moment? Let me know in the comments.